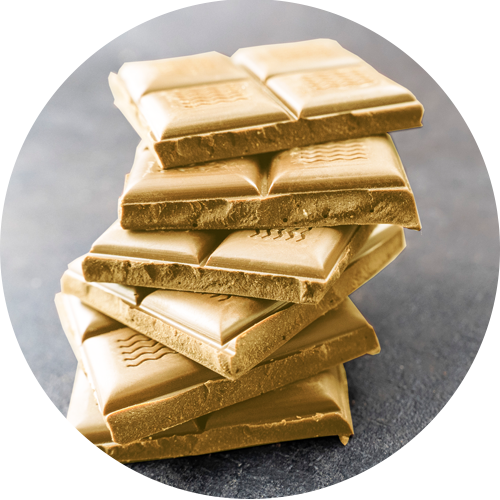 Since Europeans discovered it in the Americas, cacao and its derivatives have become a staple around the world owing to their extraordinary health-enhancing properties. And chocolate, by far the most popular form, surprises us with a new variety every once in a while.

The first chocolate bars were sold more than a century and a half ago in England. They were the bitter or dark variety because of their high percentage of cocoa.  Shortly after, in Switzerland, milk chocolate emerged with a slightly sweet touch from the milk it was mixed with.  White chocolate debuted much more recently, in 1936, and features an intense, creamy sweetness thanks to cocoa butter (which must account for around 30%) and sugar. Its flavor was further enhanced by other ingredients like vanilla, milk and flavoring.  The curious thing is that its identity was not recognized until 2004 by the US Food and Drug Administration (FDA).  And, when it seemed there was nothing more to say, just five years ago the market was taken by surprise by the launch of a new pink-colored variety made from the ruby cocoa bean it is named after and featuring a novel, fruity tone.

The latest news is that white chocolate flavor is taking consumers around the world by storm, particularly in Europe, where launches of products flavored with this variety rose to around 47% in the past three years, with the United Kingdom, Germany, Spain and France being the largest markets.  In Asia and Latin America, meanwhile, white chocolate accounts for 24% and 15%, respectively, with Japan and Brazil leading the way, and in North America it stands at around 7%.

What are the main claims? Unquestionably, they are related to the attributes of the products: they are more ethical because their production is clean certified, so it respects the environment, and because they lack additives, preservatives, and artificial colors and flavors.  Of course, the lower sugar and higher protein content are also highlighted.  White chocolate’s versatility is also praised, and includes new concepts like “snow” and white chocolate decorations for snowcakes and cookies.  As if that were not enough, consumers are offered more indulgence with presentations like the “duo,” which combines white and dark chocolate flavors in a single product.  For serious devotees, we also find it at the Premium level with three, four or even five varieties of chocolate.

“For those who are not great fans of white chocolate, there is gold, which appeals to these consumers in particular by offering an elegant, sophisticated flavor concept like gold, combined with a surprise—rich buttery caramel notes and an invigorating touch of salt.  Because of its gold color, this variety works well in practically any application, including products like cookies, chocolate bars and chocolate bonbons,” comments Daniela Gómez, Flavor Innovation Support (FIS) for CRAMER’s Sweets Category.

She goes on to explain that at CRAMER, we have created three kinds of gold chocolate: the first features prominent dulce de leche and caramel notes that recall toffee; the second, perfectly combines caramel notes with a buttery profile and the creaminess of vanilla; and the third offers accentuated caramel notes with abundant creamy vanilla and a smooth, buttery, condensed milk backdrop.