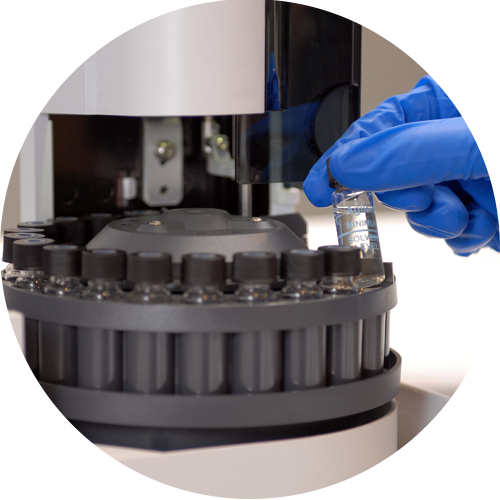 Breaking down to create something new

Just like astronomers use telescopes to observe, study and understand the deep universe, identifying the galaxies, stars and planets that comprise them, analysts use chromatography to detect the components of a complex mixture such as a fragrance.

The concept of chromatography comes from two Greek words: chroma meaning color and graphein meaning to write, alluding to the possibility of writing with color. This discipline is defined today as a set of techniques used to characterize substances by separating and purifying the components of a mixture. It is widely used in scientific research and industrial development.

Chromatographs are designed to analyze solid, liquid or gaseous mixtures, depending on the substance of interest.

At CRAMER, we use gas chromatography-mass spectrometry (GC-MS) machines featuring a library of data previously uploaded or stored by our analysts. Fernanda Amiama, Head of Chromatography and Fragrance Research, explains the process: “To conduct a chromatographic analysis, you first inject a pattern or sample into the chromatography machine. The machine then creates a chromatogram with various peaks reflecting each raw material in the sample. The libraries incorporated into the machine are then used to identify each material, thus deciphering the components in the pattern or sample. This information gives us a formula for the pattern skeleton, which can have anywhere between 30 and 120 components.”

For any components of a pattern not in the library, our analysts must identify them based on their ions or molar mass. If this search is unsuccessful, the element is entered as unknown. The library is a sort of ever-growing data repository.

Once the pattern skeleton is obtained, our perfumers perform the next step, using it as a benchmark to create a new fragrance tailored to customer needs.

CRAMER’s Fragrance Area currently has five analysts, who receive ongoing training on equipment use and procedures.

Our Flavor Area also has two chromatography machines similar to those in the Fragrance Area.

This technology is so important to our daily work that we purchased a new, state-of-the-art gas chromatography-mass spectrometry (GC-MS) machine two years ago for our lab in Brazil.